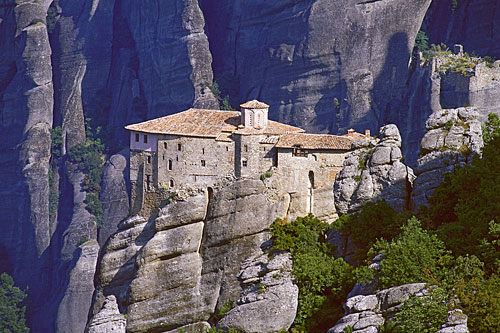 
Perched high atop spires of conglomerated Calcerous and sandstone rock, the monasteries of Meteora are one of the world's most spectacular sacred sites. Located in the Thessaly region of north central Greece and overlooking the valley of Pinios, the towering rocks of Meteora, meaning 'rocks in the air', have long evoked awe in human beings. Paleolithic remains indicate settlements around the stones from between 100,000 to 40,000 BC, and hermits and ascetics have lived in the area since long before the Christian era. The arrival of Christianity began in the 8th century, organized monastic communities had developed by the 12th century, and by the mid 1500's twenty-four Greek Orthodox monasteries had been constructed upon the spires of stone. The monasteries, 200-600 meters high (and some accessible only by baskets lowered by ropes and winches), became a center of scholarship and art until the mid 18th century when popular interest in monasticism declined. Most of these meteorisa monastiria ('hanging monasteries') were abandoned and today only six survive, of which four can be visited by way of bridges and rock-cut steps. Previously a remote area, the construction of a highway in the early 1960's made the monasteries accessible to pilgrims and tourists. This influx of visitors, however, has discouraged new monks from joining the monasteries and compelled others to move to Mt. Athos in search of solitude and privacy. 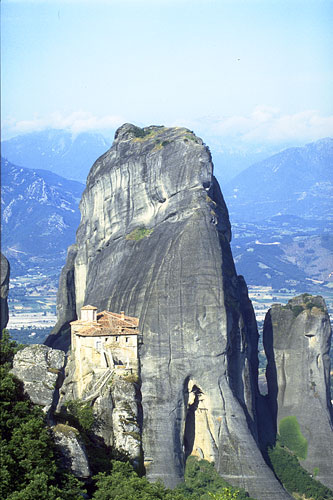